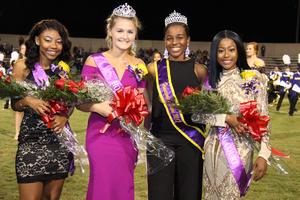 Congratulations to senior student Caroline Bedenbaugh on being named as the 2018 B-L High School Homecoming Queen.  Caroline was crowned during halftime festivities on Friday, October 12th when the Panthers faced off against Ninety Six.  First runner-up was Taleah Tolen and second runner-up was Sa’Nia Perry. The winners were determined by majority votes that were cast by the B-L High School student body.